In order to capture a client’s LANMAN/NTLMv1 response, attackers will often utilise one of two methods:
To demonstrate these methods, I will be using the Metasploit Framework or Cain and Abel respectively.
Metasploit
In order for a client host to connect to us, we first need to create a listening SMB service that will accept incoming connections. Fortunately, the Metasploit Framework has already provided us with a module to do this :)
1. Fire up Metasploit
2. Load the SMB server module

Now that we have a listening SMB service, all that is needed is for a victim to connect to our machine. By calling “info” on the SMB server module, the module’s description explains “The easiest way to force a SMB authentication attempt is by embedding a UNC path (\\SERVER\SHARE) into a web page or email message.”
A successful capture will look something like this:

Cain and Abel
The second method we can use to capture a client’s response is by conducting a MITM attack using Cain.
1. Start Cain’s sniffer
2. In the “Sniffer” tab, select the “Plus” icon and choose the hosts victims to poison. 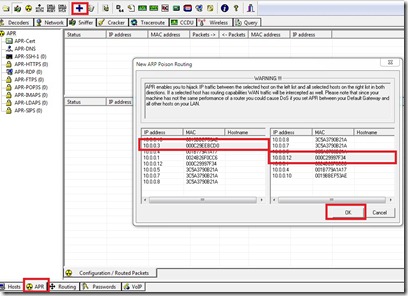 3. Activate Cain’s ARP Poison Routing feature
4. Select the bottom “Passwords” tab and wait for the client’s response to appear in the left pane under “SMB”. 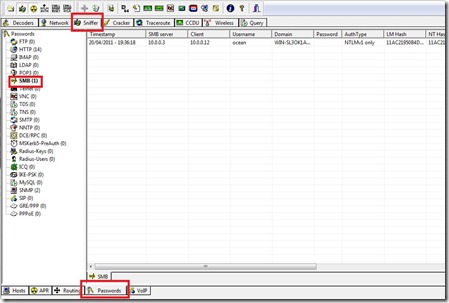 Three approaches are often referenced when cracking a LANMAN/NTLMv1 response:
All of these methods use what is known as the “known challenge attack” technique. In order to crack the LANMAN/NTLMv1 response we are exploiting the fact that the only randomness (or entropy) that makes the LANMAN/NTLMv1 response unique every time is the challenge sent by the Server. As the attacker is always the Server, we can send the client a static challenge. This effectively defeats any randomness in the protocol. Because we now know what the challenge will be every single time, we can effectively crack the LANMAN/NTLMv1 response as if it were a static response.
Note: It is common practice to use \x11\x22\x33\x44\x55\x66\x77\x88 as the static challenge.
Before we look at each of these methods it should be noted that LANMAN responses are only configured on Windows XP and Server 2003 system (by default). Windows 7, Vista and Server 2008 systems are configured to utilise NTLMv2 by default.
A simple test to check which protocol is currently in use is to see if the LM Hash and NT Hash are different in the capture logs. A difference in these hashes would indicate LANMAN is in in use. If these hashes are the same, LANMAN is disabled and NTMLv1 is in use.

Note: We are only cracking the first 8 bytes of the captured LANMAN response. Due to the nature of the LM Hash, we are only able to use rainbow tables on the first portion of the LANMAN response. The rest we will have to use brute-force.
A successful result will look like this:

The remaining characters we can brute force using the Metasploit “halflm_second.rb” script. This can be found in the “tools” directory in the root Metasploit directory. The script is run as follows:

Where –n is the LANMAN response and –p is the discovered plaintext.
Whilst it is possible to crack an NTLMv1 response using rainbow tables, I have yet to come across any that have been pre-computed. Due to the nature of NT Hashes, NTLMv1 rainbow tables would be far more time consuming to generate and require large amounts of disk space.
2. Dictionary Attack
The second method often used to crack LAMNAM/NTLMv1 responses is a dictionary attack.
I will demonstrate the dictionary attack using two common tools:
John the Ripper
The following syntax is used to mount a dictionary attack against LANMAN responses:

Where capture.txt is the file containing the LANMAN response. The format of capture file must be as follows:

Where test is the username, home is the workgroup/domain, the first hash is the LM Hash, the second hash is the NT Hash and the final value is the challenge.
To use john against NTLMv1 specify netntlm with the -format flag.
Cain and Abel
If Cain was used to sniff the capture, right click on the entry and select “Send to Cracker”.

In the “Cracker” tab, right click on the entry and choose your appropriate option from the “Dictionary Attack” menu option. Note: For a list of dictionary files see my post on wordlists.
If you did not capture the response using Cain, and are importing a capture file, the file must be in the following format:

3. Brute Force
Whilst crude, brute-forcing can be effective against weaker passwords.
To brute-force in Cain, follow the steps detailed above and select “Brute-Force Attack” from the menu item.
For the sake of brevity, I will not go into how John the Ripper can brute-force hashes. This is quite a lengthy topic in itself. Further reading on this topic can be found using Google.
authentication cracking dictionary lm microsoft ntlm wordlist

The Microsoft Windows platform uses a myriad of protocols to authenticate users across a network. Two such protocols widely in use today are the LANMAN challenge/response and NTLMv1 protocols. Whilst newer, more secure protocols (such as NTLMv2) are ready to take their place, LANMAN challenge/response and NTLMv1 are still widely deployed today for reasons of interoperability. As with most things Microsoft-related, ubiquity often equates to exploitability. In this two part series I will discuss how the LANMAN challenge/response and NTLMv1 protocols operate, how malicious users can take advantage of their shortcomings, and best practice recommendations for securely deploying these protocols. Microsoft Windows supports two primary algorithms for locally authenticating users. These algorithms generate what’s known as an “LM Hash” or an “NT Hash”. Enabled by default in Windows NT, 2000, XP, and Server 2003, the LM Hash has become synonymous with bad hashing practices over the years
Read more